All or our specimens are 100% authentic, guaranteed.

This sawfish rostrum belonged to an "Onchopristis" which is a genus of extinct giant sclerorhynchid sawfish from the Lower Cretaceous to Upper Cretaceous of North America, North Africa, Brazil, and New Zealand. It had an elongated snout lined laterally with barbed teeth. The rostrum, or snout, ranged up to 2.5 m (8.2 ft) in length, it was lined with barbed teeth, each tooth had one barb, but some species had two or more  barbs on each tooth.
As with modern sawfish, Onchopristis' eyes were on top of its head, to spot predators rather than prey, and its mouth and gills were under its body. The rostrum most likely would have had electroreceptors to detect food in the water below them like most modern sharks and some rays. Onchopristis may have raked through the riverbed to find and then eat their prey.
This rostrum was professionally reconstructed by a master Jaw and skull preparer using the highest quality teeth and a modern sawfish rostrum. The dentition is anatomically correct based on extensive research and relative literature. 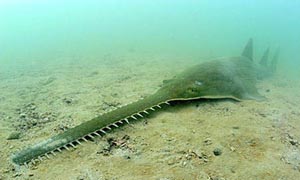 Type: Actual specimen- one only